Apologies if you were enticed by the title alone – this isn’t a post fawning over the city’s many charms. This is a response to the current blogging prompts – something I saw that caused a burning sensation, deep inside, a feeling of helplessness over all else.

Truth be told, this could happen anywhere, at all – within India, outside it. It would not even necessarily be the kind of setting that I saw that evening in the heart of new delhi – at Rajiv Chowk (that shopping district in the capital that many who can afford to actually shop there, still refer to as Connaught Place).

Two years ago, in the month of March, when leaves fall and the morning air has the leftover cold of the winter, I was in Delhi. That evening, under the lovely Georgian columned verandahs, the city’s young, some fashionable and others who try hard, strolled leisurely. Those who didnt indulge in the city’s designated competitive sport – eating – stared at the objects of desire displayed in the large show windows. I was hurrying towards an entrance to the metro station and to my right, was such a shop that reflected those walking and to capture that, I walked closer.

Closer though, once my eyes adjusted to the darkness  just a couple feet away from the the store -I saw a blanket stirring gently. I stopped in my tracks, making no attempts to get any closer to the glass. Then the person under the blanket got her (?) hand out till it rested so close to the door that one couldn’t have entered the store without stepping over her.

The contrast couldn’t be stronger between the background and the foreground and for that reason alone, I did photograph the entire scene. I didn’t release it for every-time I look at it, it makes me sad.  Below – 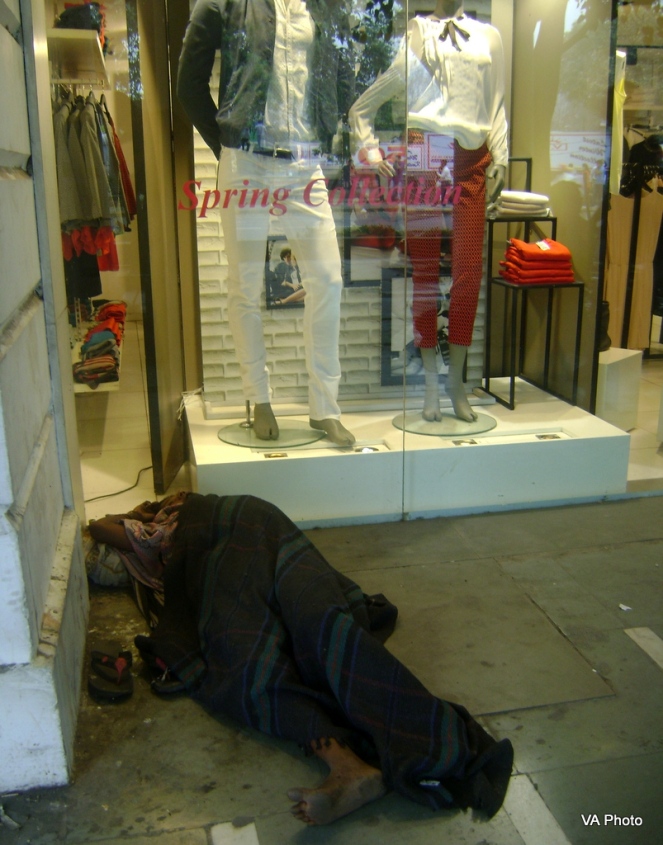 If this photo moves you or makes something inside of you Burn, leave a comment.